A New Israeli Wonderland, Where You Can Almost Forget Where You Are

An alien spaceship theme park, an Italian Renaissance-style mall, a canal with gondolas. “Nothing in Israel compares with it,” the developer says. There’s just one catch.

MAALE ADUMIM, West Bank — There is a vast indoor amusement park that resembles an alien spaceship run aground in the Judean Desert and, nearby, a luxe shopping mall rising incongruously in Italian Renaissance style in the beige hills east of Jerusalem. Its grand piazza features pricey kosher restaurants, a miniature canal with toy gondolas and an artificial sky set to a romantic twilight, even at lunchtime.

“Nothing in Israel compares with it,” declared Pnina Revach, the chief executive of the mall, which specializes in home design and has an attached boutique hotel.

There is a wrinkle.

Israeli public relations gurus are likening the growing commercial and entertainment hub, Park Israel, which opened about three months ago, to the attractions of Las Vegas, Dubai and Orlando. But as they appeal to Israelis to visit, they are vague about exactly where it is. One ad suggested simply entering the name of the mall, DCITY, into a navigation app.

The roughly 20-minute drive from central Jerusalem is a giveaway, however. As one emerges from a tunnel under the Mount of Olives, the view is dominated by the high-rise Palestinian suburbs of Al Azariya and Al Zayyem. Bedouins graze herds on the slopes. And the turnoff to the amusement park and mall lies just beyond a military base.

Like their counterparts around the world, the shiny complexes are all about making you forget where you are, and perhaps all the more so because they are not in Nevada or Florida — or even in Israel proper.

They lie instead in the hitherto drab industrial zone of a sprawling Jewish settlement, Maale Adumim, in the occupied West Bank.

The developers hope to turn a geopolitical hot spot into a hot ticket.

“Everybody stands in the middle of the piazza and says, ‘Wow!'” Ms. Revach said.

More than a half-century after Israel seized the West Bank from Jordan in the 1967 war, most of the world considers the increasingly entrenched settlement project as a violation of international law. But with peace talks long stymied, the new attractions are only the latest — if perhaps the most surreal — illustration of the increasing complexity on the ground, and of the fading prospects of a resolution to the conflict by means of an independent Palestinian state alongside Israel. 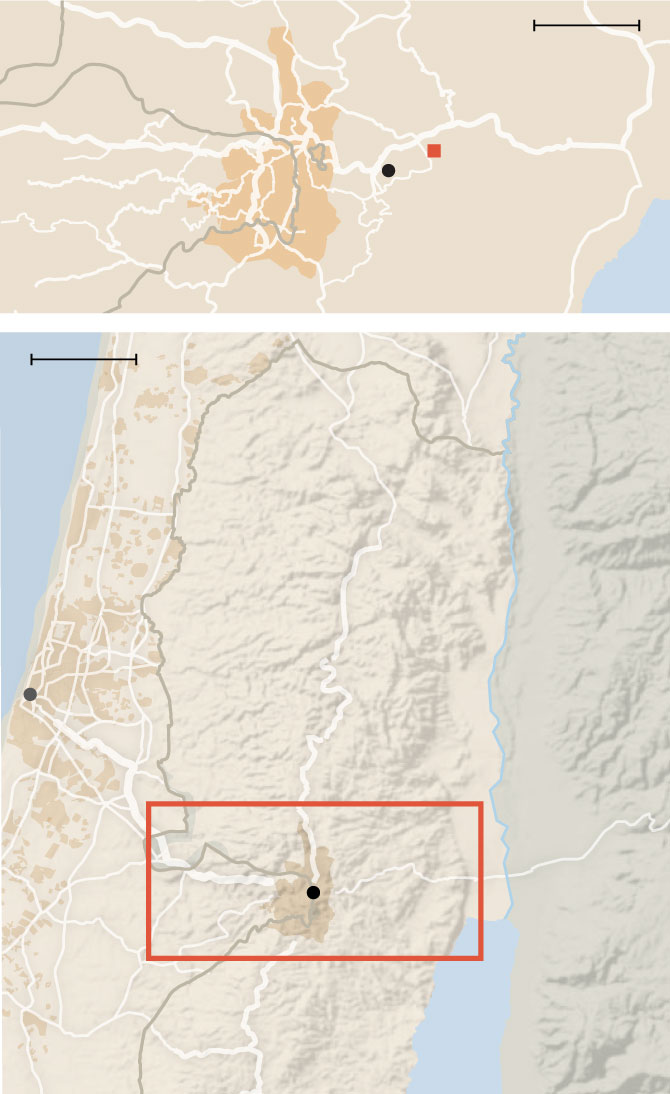 For the Palestinians, the area is a critical segment of the north-south corridor of any viable, contiguous future Palestinian state. Longstanding Israeli plans to expand Maale Adumim in the direction of Jerusalem have so far been blocked by international pressure on grounds that the development would effectively sever any Palestinian state into halves connected only by highways.

Israel also views Maale Adumim, a bedroom community of about 40,000 residents, as of strategic importance. It commands the high ground between Jerusalem and the border with Jordan, and most Israelis assume it will remain in their hands as part of a land swap with the Palestinians in any future peace agreement.

The lines became more blurred when the Maale Adumim council recently changed the name of the former industrial zone known as Mishor Adumim to rebrand it as a commercial and entertainment space. A few years ago, a SodaStream factory based there became a target for pro-Palestinian boycott activists and has since relocated to southern Israel.

The mall and the amusement park, known as Magic Kass, are the brainchildren of Hanoch Kass, the owner of Kass Group, a real estate and land development company. An ultra-Orthodox Jew, Mr. Kass, 38, lives in another settlement in the greater Jerusalem area.

But his associates avoid speaking about politics and insist that the industrial park was chosen purely for commercial reasons, not out of ideology or nationalism.

The ads for the complex do not only fail to say that it is in the West Bank. They also make no mention of Judea and Samaria, the biblical names for the area used by the Israeli right, and, increasingly, by the government and Hebrew media.

The amusement park, enclosed in a giant, metallic orb, is a world unto itself, tapping into contemporary youth culture and drawing heavily on collaborations with social media influencers and platforms like Instagram and TikTok. The developers have three more covered theme parks in the works nearby, including go-karting and water rides.

The concept, according to Karin Larom, the chief executive of Magic Kass, is to tempt people to spend a few days’ vacation at the resort. Its location in the West Bank is irrelevant to many Israelis and Palestinians alike, she argued.

“There is a reality — you can’t ignore it,” she said. “There will always be the extremes on either side. Most people are in the middle. They want a quiet life and to make a living.”

As if to illustrate the point, one recent morning, the three-story fairground was packed with 1,500 Palestinian youths, mostly boys, on an outing from four schools in Israeli-annexed East Jerusalem. Seemingly oblivious to the geopolitics, the middle schoolers screeched in fear and delight as they plunged down the sky tower and hurtled around the extreme 360-degree Looper ride.

“Most of the parents want their children to have fun more than anything else,” said Imad Karain, the trip organizer from one of the schools.

Mr. Karain said he had received no complaints, though he did acknowledge some uneasiness about being in a settlement. Of the parents he said: “Politics doesn’t interest them so much. We want to live in peace and bring up our children in peace. We believe in coexistence and negotiations to solve the problem.”

“Enough of war and violence,” chimed in Muhammad Baidun, an English teacher.

The next day, Magic Kass was booked by an ultra-Orthodox Jewish boys’ yeshiva. And when the gates opened to the public in the late afternoon, the line was a mix of the religious and the secular, Jews and Arabs.

While Palestinians from Jerusalem can come and go as they please, however, those from the West Bank need a government permit to enter the settlement. It was not clear whether they could obtain one to visit the attractions. The management and several Israeli officials said they did not know what the procedure was.

To West Bank residents, the policy makes the whole complex an example of the two-tier legal system in the occupied territory that critics increasingly describe as a kind of apartheid.

“No park can beautify apartheid,” said Ahmad Majdalani, the minister of social development for the Palestinian Authority, the self-governing body that exercises limited control in parts of the West Bank. Park Israel, he said, was “an attempt at normalizing a process of ongoing annexation of the occupied territory of Palestine.”

Complicating the picture, though, Maale Adumim and Park Israel currently provide jobs for about 5,000 Palestinians and a similar number of Jews, including cleaning and maintenance staff and managers. The Palestinian workers from the West Bank have permits, but most have to leave their cars outside a security barrier at the park’s entrance.

“I wish we could cancel that, but unfortunately we cannot because there are still people who engage in terrorism,” Guy Yifrach, the deputy mayor of Maale Adumim, said of the permit system.

Distinguishing between “legal definitions and life itself,” he described Maale Adumim as a paragon of “practical coexistence.”

Many see not coexistence but nonstop co-optation.

A short drive away from the settlement lies the tiny Bedouin community of Khan al Ahmar, a dusty cluster of shacks and a school long threatened with demolition, connected to neither the electricity grid nor the water mains.

“They take slices of land for this and for that, like cheese,” said Eid Khamis Jahalin, the leader of the community. “The whole industrial zone is not legal, and they are taking grazing land from the Bedouin. Why didn’t they build it, say, in Beersheba or Hadera or Tel Aviv?”

The developers behind Park Israel are betting that its allure will win out.

In the gilded piazza, outside a high-end gift store owned by a Palestinian man from East Jerusalem, a Hasidic couple, David and Rivka Kahana, were strolling with their toddler, his face covered in chocolate ice cream.

“We are in shock,” Ms. Kahana said, taking in the surroundings.

“So many shops in one place,” Mr. Kahana marveled. “I didn’t know anything like this existed in the world.”