Obama to Young People on Climate: ‘You Are Right to Be Frustrated’

Former President Barack Obama addressed young people directly at the COP26 climate summit in Glasgow, urging them to engage in political action and activism to push world leaders into action on the climate crisis.

You’ve been bombarded with warnings about what the future will look like if you don’t address climate change. And meanwhile, you’ve grown up watching many of the adults who are in positions to do something about it either act like the problem doesn’t exist or refuse to make the hard decisions necessary to address it. You are right to be frustrated. Folks in my generation have not done enough to deal with a potentially cataclysmic problem that you now stand to inherit. But I also want to share some advice from my mother used to give me. You know, if I was feeling anxious or angry or depressed or scared — she’d look at me and she’d say, “Don’t sulk. Get busy. Get to work. And change what needs to be changed.” Vote like your life depends on it because it does. I recognize that a lot of young people may be cynical about politics. But the cold, hard fact is we will not have more ambitious climate plans coming out of governments unless governments feel some pressure from voters. So if we’re honest with ourselves, yes, this is going to be really hard. The thing we have going for us is that humanity has done hard things before. I believe we can do hard things again. Yes, the process will be messy. I guarantee you every victory will be incomplete. We will face more setbacks. Sometimes, we will be forced to settle for imperfect compromises, because even if they don’t achieve everything we want, at least they advance the cause, at least they move the ball down the field. But if we work hard enough for long enough, those partial victories add up. 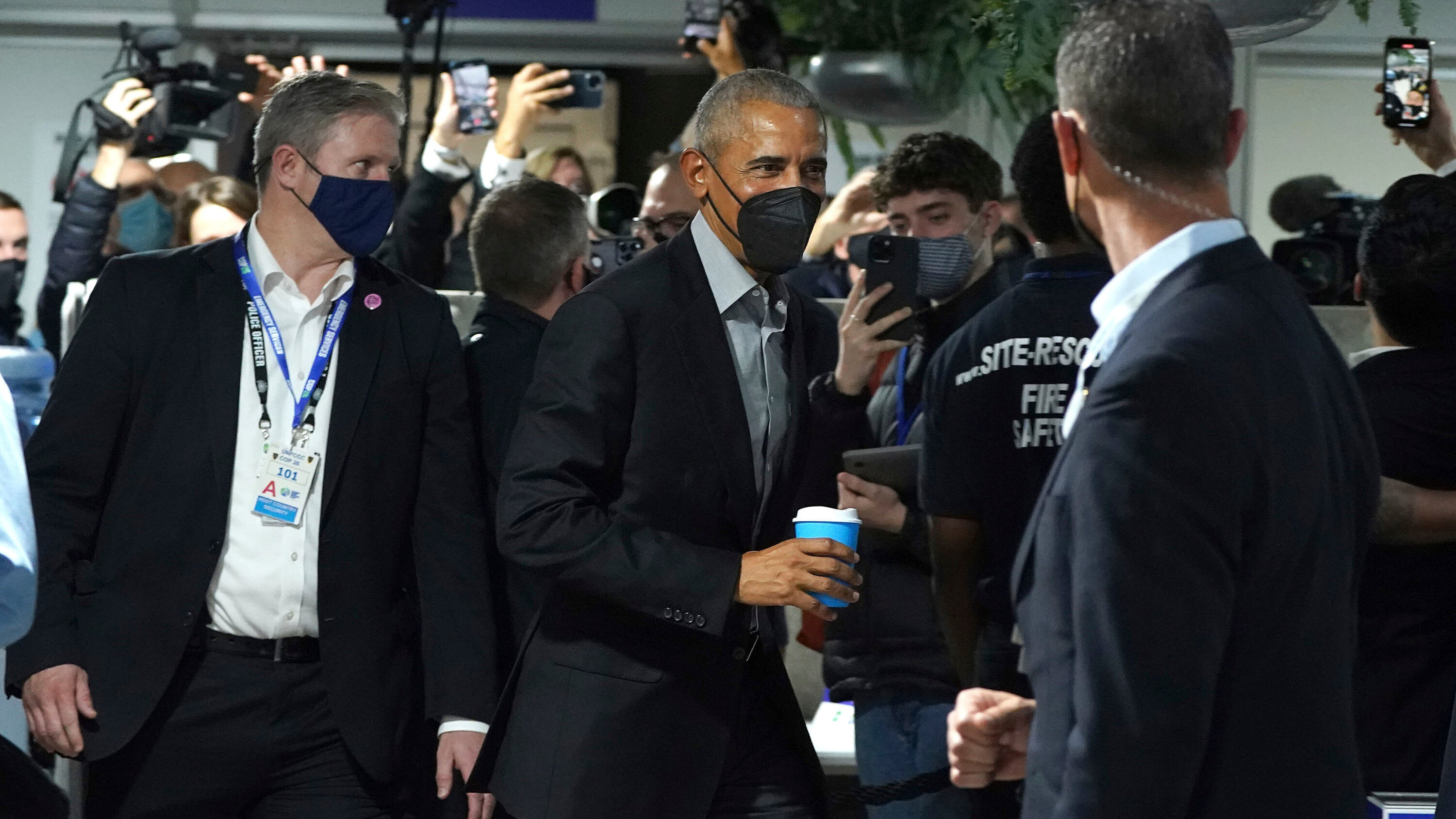 Former President Barack Obama addressed young people directly at the COP26 climate summit in Glasgow, urging them to engage in political action and activism to push world leaders into action on the climate crisis.CreditCredit…Andrew Milligan/Press Association, via Associated Press

GLASGOW — Former President Barack Obama, who helped to seal the Paris climate agreement six years ago, returned to an international climate summit here to rally nations to heal the planet, acknowledging the enormous complexity of the crisis but arguing that humanity has the capacity to create a safer, healthier world.

“To be honest with ourselves, yes, this is going to be really hard,” said Mr. Obama, who was welcomed with sustained applause by delegates from nearly 200 nations. “The thing we have going for us, is that humanity has done hard things before. I believe we can do hard things again.”

“Yes, the process will be messy,” he said. “I guarantee you every victory will be incomplete. Sometimes, we will be forced to settle for imperfect compromises. But at least they advance the ball down the field. If we work hard enough, for long enough, those partial victories add up.”

Mr. Obama noted that the Paris agreement, signed by 197 countries in 2015, created a framework for climate action, but nations, including the United States, failed to follow through on their commitments to keep global warming within relatively safe margins.

“Important work was done there, and important work is being done here,” he said. “That is the good news. Now, for the bad news. We are nowhere near where we need to be.”

Mr. Obama’s appearance at the summit was greeted with enormous enthusiasm, with a large crowd straining to catch a glimpse of the former president, phones held aloft to snap a photo as he walked into the hall. He received a standing ovation after his address.

At each of several events, Mr. Obama emphasized the power of activism, particularly from young people, in pushing countries and companies to address the climate crisis.

“The most important energy in this movement is coming from young people,” he said. “And the reason is simple. They have more at stake in this than anybody else.”

He said he understood the psychic weight carried by younger generations, and the anger that many feel about inheriting a world where storms have become more ferocious and frequent, heat waves more deadly, where species are disappearing and the future feels frightening.

“I’m the father of two daughters in their early 20s,” he said. “It’s not always easy being young today. For most of your lives, if you’re in that generation, you’ve been bombarded about what the future will look like if we don’t do anything about climate change. And you’ve grown up watching the adults either act like the problem doesn’t exist or don’t do anything about it. It’s a real source of anxiety and some of you no doubt wonder if you’ll be safe.”

And he acknowledged that he, too, sometimes felt overwhelmed.

But, he cautioned, “cynicism is the recourse of cowards. We can’t afford hopelessness.”

For Mr. Obama, Glasgow also amounted to a kind of redemption tour. After witnessing his legacy on climate policy ruthlessly undone by his successor, Donald J. Trump, Mr. Obama was able to represent a United States that was once again at the table, to tackle a global problem that it has had such a big hand in making.

Mr. Trump pulled the United States out of the Paris accord, which Mr. Obama had played a significant role in brokering, and unwound more than 100 of Mr. Obama’s environmental regulations. On Monday, he called Mr. Trump’s tenure “four years of active hostility toward climate science, coming from very top of our government.”

But Mr. Obama’s presence at the summit was also a reminder that the United States has often failed to keep its promises on tackling climate change.

He was reminded of this even before he began speaking Monday, with some young activists criticizing the United States for not paying its fair share of financial aid to help poor countries address climate change.

The activist Vanessa Nakate wrote on Twitter that she was 13 when Mr. Obama promised that the countries of the global north would provide $100 billion in climate financing a year by 2020. That money hasn’t yet materialized. “The US has broken that promise, it will cost lives in Africa,” she tweeted. “You want to meet #COP26 youth. We want action.”

To the extent President Biden has been able to restore Mr. Obama’s climate agenda, it has been through diplomatic moves, like rejoining the Paris Agreement, or through legislation that, if it wins passage, will do so almost entirely on Democratic votes because Republicans have withheld support.

“One of our two major parties has decided not only to sit on the sidelines, but express active hostility toward climate science and make climate change a partisan issue,” Mr. Obama said.

“Saving the planet isn’t a partisan issue,” he said, adding that politics don’t matter “if your Florida house is flooded by rising seas, or your crops fail in the Dakotas or your California house is burning down. Nature, science do not care about party affiliation.”

His agenda was carefully curated. In addition to a plenary address, Mr. Obama spoke to leaders of several island countries already feeling the acute impacts of climate change, emphasizing the need for money to help vulnerable countries adapt to a hotter planet. He joined a closed-door meeting with a bloc of countries that call themselves the High Ambition Coalition and ended his day with a round table with young advocates, organized by the Obama Foundation along with Columbia Climate School.

At the round table event in the late afternoon, a large group of students waited at the entrance to see his arrival at the University of Strathclyde. An even larger group gathered near the gates when he left, nearly two hours later.

Luisa Neubauer, 25, a leader of the Fridays for the Future movement in Germany, who was part of the round table, said afterward that it was a positive sign that the United States, under Mr. Biden, was making new pledges, though she felt it hadn’t been honest about its past failings. “Young people, me included, we are very reluctant to be hopeful just because a new leader makes a promise or a former president goes around making promises,” she said. “Because we have been betrayed again and again.”

During the summit, young people have filled the streets of Glasgow and around the world to demand more ambitious action on climate change from their leaders. Mr. Obama urged them to keep up the pressure and to “stay angry.”

“The cold hard fact is, we will not have more ambitious climate plans coming out of governments unless governments feel some pressure from voters,” he said.

“Don’t think you can ignore politics,” Mr. Obama said. “You don’t have to be happy about it. But you can’t ignore it. You can’t be too pure for it. “

He also cautioned them on the limits of protests and what he called “hashtag campaigns.”

“Protests are necessary. Hashtag campaigns can spread awareness. But to build the broad-based coalitions necessary for bold action, we will have to persuade people who either don’t currently agree with us or are simply indifferent,” he said in his plenary address. “There are workers and communities that still depend on coal for power and jobs, and are more concerned about maintaining their wages now than they are about a warmer planet ten or twenty years from now.”

Mr. Obama said Monday that rich industrialized countries like the United States had “an added burden” to aid nations at the front lines of climate impacts. The Biden administration has pledged $11.4 billion in climate aid over the next few years, with roughly a fourth of that for adaptation, though that money still requires congressional approval.

“Those of us who live in big wealthy nations, those of us who helped to precipitate the problem, we have an added burden to make sure that we are working with and helping and assisting those who are less responsible and less able and more vulnerable to this oncoming crisis,” Mr. Obama said.

For decades, many of the most vulnerable countries have pressed for reparations from rich industrialized countries, as part of what they call a loss and damage fund. The United States and other rich countries have long been reluctant to agree to anything that opens them up to liability.

The Marshall Islands said it would need “tens of billions” of dollars for adaptation, including to elevate its territory and move its people away from harm’s way.

Mr. Obama urged the delegates to keep pushing forward, turning to Shakespeare for inspiration about the pace of progress. “What wound, he writes, did ever heal but by degrees?” Mr. Obama said in his plenary address.

“Our planet has been wounded by our actions,” he said. “Those wounds won’t be healed today or tomorrow or the next. But they can be healed by degrees. If we start with that spirit, if each of us can fight through the occasional frustration and the dread, if we do our part and follow through our commitment, I believe we can secure our future. We have to. And what a profound and noble task we have set for ourselves.”

Omicron Has Scary Mutations. That Doesn’t Mean They Work Well Together

Antiviral Covid-19 Pills Are Coming. Will There Be Enough Tests?