In Saskatoon, a Moose on the Loose Is Returned to the Wild

A young moose crashed into a room at Sylvia Fedoruk Public School in Saskatoon, Canada. She was banged up, but OK. 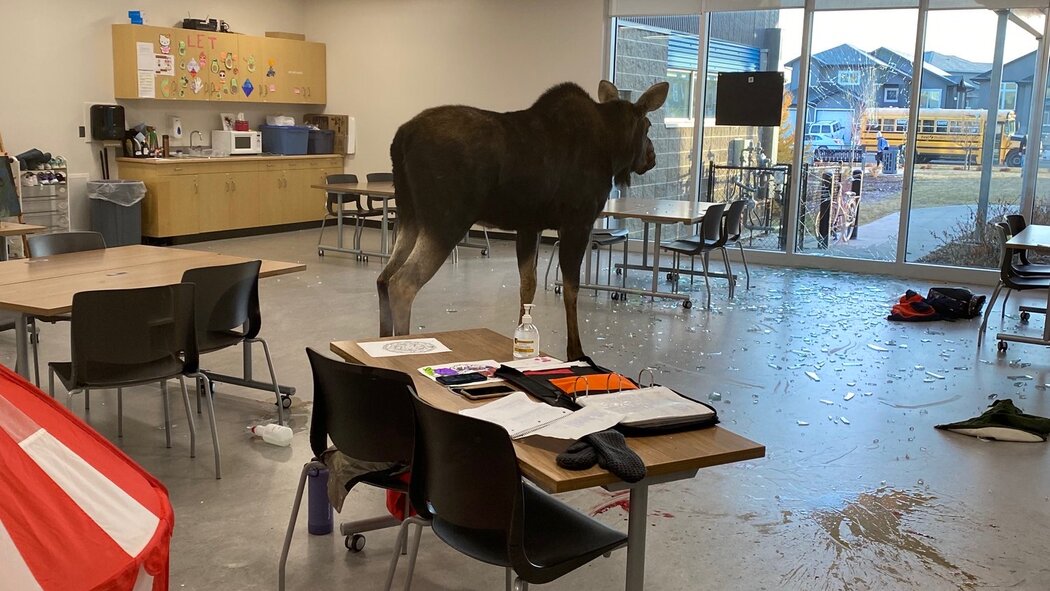 A young moose crashed into a room at Sylvia Fedoruk Public School in Saskatoon, Canada. She was banged up, but OK.CreditCredit…Via 92.9 The Bull

She was a young moose, not even 2 years old, still getting used to her surroundings, when she took a wrong turn on Thursday and crashed through the window of an elementary school classroom in Saskatoon, in Canada’s central prairie.

By day’s end, the moose, though a little banged up, had found her way into the hearts of Canadians across the country. Photos of the moose standing in the classroom, shards of glass surrounding her, had swept across social media, stirring a mixture of delight and concern.

Fourteen children attending a before-school program at the school, Sylvia Fedoruk Public, were in the room at the time, but they were uninjured and were immediately led away by staff.

“We’re still kind of all in shock about it,” said Veronica Baker, a spokeswoman for Saskatoon Public Schools, in what might have been a bit of understatement.

“It’s just kind of a quintessential Canadian story,” said Pat Dubois, a host on a local country radio station, known as 92.9 The Bull, who had spotted a moose on his way to work and asked listeners to keep their eyes out.

“Once we found out that the students were OK, and that while the moose was slightly injured, it was going to be OK,” Mr. Dubois said, “then we kind of got a chance to laugh a little bit more.”

The quips flew online: The moose was tired of virtual learning! The students had a special guest for biology class! The schools are finally getting back to normal! (After all, about 48,000 moose call the province of Saskatchewan home.)

Like a youngster still finding her way around the neighborhood, the moose just lost its sense of direction.

A yearling, the moose was just a few blocks from its normal habitat, said Steve Dobko, a conservation officer with the Ministry of Environment for Saskatchewan. “But it took a wrong turn and it ended up in a schoolyard,” he said.

The moose was resting by the time wildlife officers arrived, apparently exhausted by her sudden, adrenaline-fueled visit to the school, Mr. Dobko said. The officers were able to tranquilize her before releasing her back into the bush, he said.

The moose was tall and skinny, just like you’d expect a teenager to be, Mr. Dobko said, and weighed only about 750 to 800 pounds (small by moose standards).

Sarah Paulgaard was walking her three daughters to school on Thursday morning when they spotted the moose running about 10 feet in front of them. The young animal beat them to school, crashing through the floor-to-ceiling window moments before they got there.

As they arrived, the principal’s voice came over the intercom to inform everyone of the unexpected visitor. Ms. Paulgaard was relieved that the moose had not been seriously injured.

“If it just would have gone straight instead of turning left into the school, she would have been over a land bridge and back into nature,” Ms. Paulgaard said. “She really didn’t have that far to go. She just made a wrong turn.”